In view of John’s reputation for blocking critical comments (and deleting embarrassing past blog posts) I am taking the precaution of archiving the exchange here for the benefit of any of his more curious followers who may wonder what came later should these tweets be ‘lost’.

The original links will be added later today. I’ve just posted nearly thirty times my previous total number of Tweets (1, plus a few accidental clicks which ended up as empty tweets) in the two and a half years since I was forced to join Twitter to follow Brittany Ferries and find out whether the ferry I was booked on would sail or not (it did not). I have to say that being forced to receive and wade through pretty pictures of other ferry ports without any strike linked chaos on my mobile phone, while waiting for a simple yes/no/divert to Cherbourg text tweet, did not encourage a positive attitude to Twitter. I’m taking a break for now.

Apologies for the image sequencing, duplication and omission error. Only noticed when out. Corrected now.

As anticipated, I’m now blocked by John. This may be an automated Twitter thing, in which case John is not responsible. But if he chose to block me it might have been wiser to read carefully first. My understanding is that these Tweets remain visible to his many followers even after I have been blocked – the whole point of sending them in rapid succession, and if he has actively chosen to block criticism point out his errors, which can easily be verified, this will not perhaps impress those of his followers who see it. He might have anticipated this: 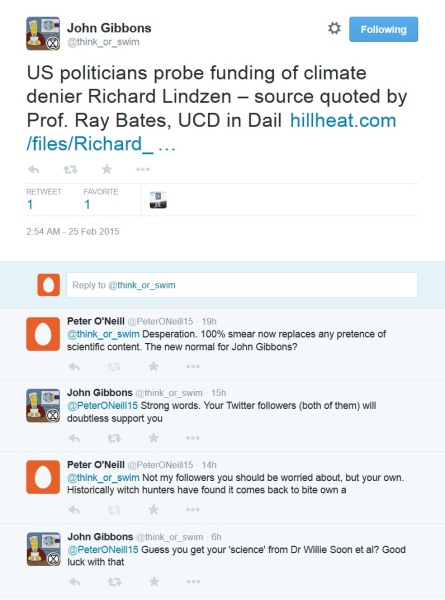 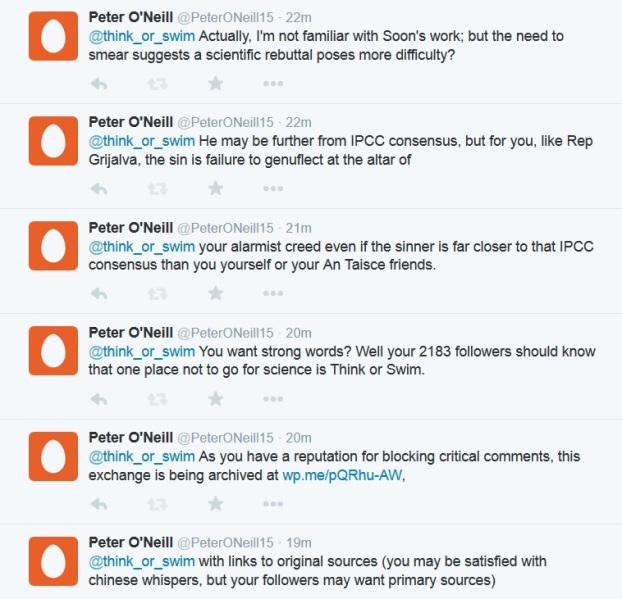 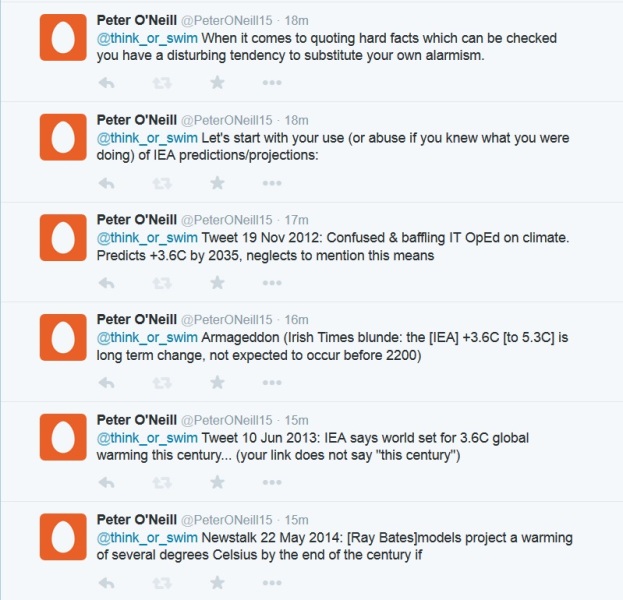 IT OpEd: Irish Times Editorial “Climate change and Ireland”, November 19, 2012 (2035 in printed edition was corrected to 2200 for the online version)

IEA Report (this OpEd): WORLD ENERGY OUTLOOK 2012, International Energy Agency. (costly – try library, or be satisfied with the second IEA report linked just below, which is free to download) Figure 8.4 on page 247 indicates that this “long-term average temperature increase” of 3.6°C is a median estimate for the year 2200.

IEA Report (from that link): Redrawing the Energy-Climate Map  pages 9, 26 and 33, and in particular footnote 9 on page 33 explaining the meaning of “longer term”

As for several degrees by mid century, I would normally allow a certain latitude for spur of the moment responses during unscripted and unrehearsed radio interviews, but John has been consistent on this. I’ll give him credit though for avoiding claiming IPCC support for this, preferring instead his odd trio of World Bank (another story), IEA (this blunder) and Christine Lagarde (an authoritative reference perhaps in a different context, but I regret to say that in this context John might as well have cited himself as authoritative support for his own claims. 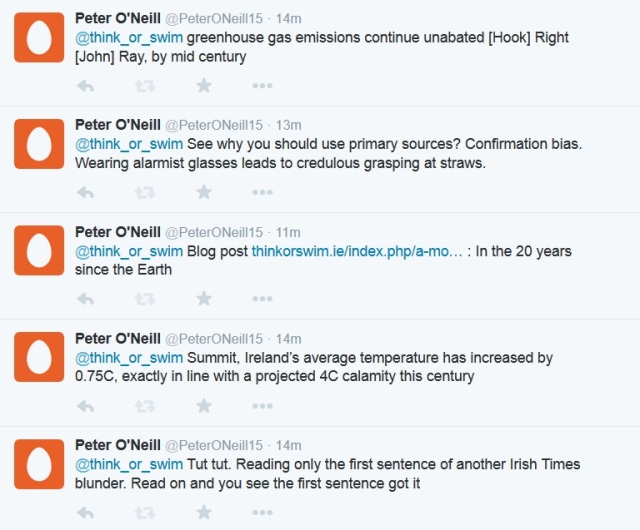 In the 20 years since the Earth Summit: http://www.thinkorswim.ie/index.php/a-monkey-trap-of-our-own-construction/

The arithmetic is correct, although the report might not be regarded as a model of clarity, and indeed starts by making the same error as John. However, a “specialist environmental writer and commentator” might be expected to read further than the first sentence and to notice that the interval referred to is not the 20 years since 1992. 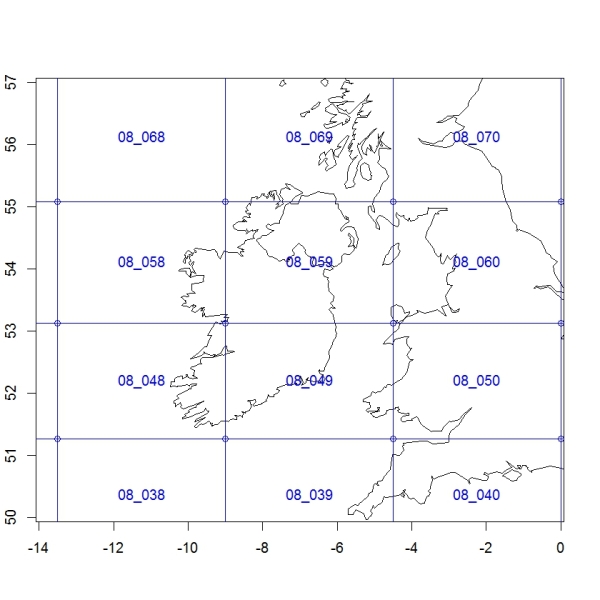 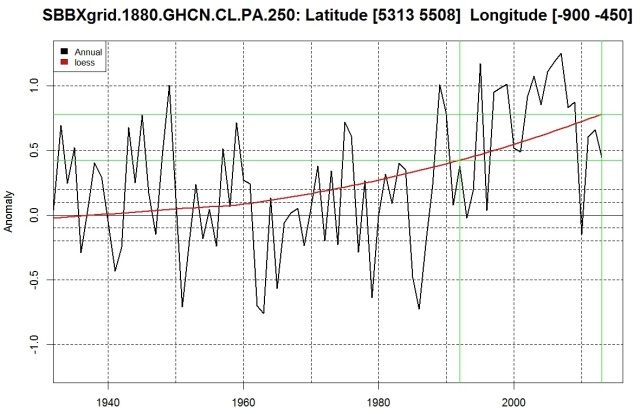 The data plotted here can be downloaded as http://data.giss.nasa.gov/pub/gistemp/SBBX1880.Ts.GHCN.CL.PA.1200.gz (This is a large file in binary format, updated monthly and covering 1880 to current month. Reading it requires knowledge of the Gistemp binary file format used) 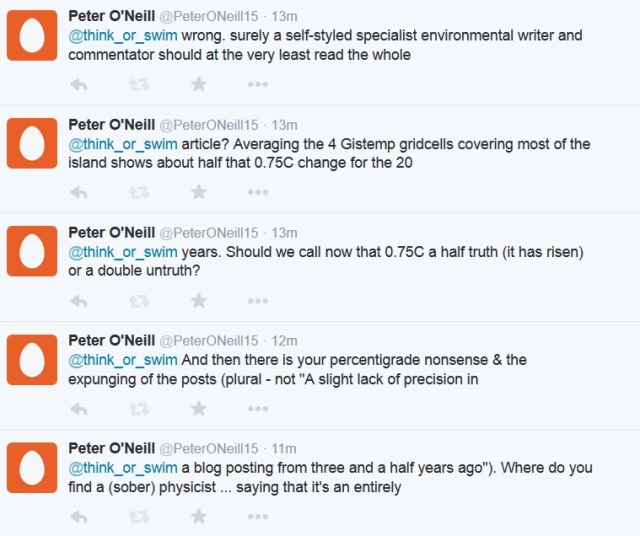 As for “percentigrade”, here is a post I never got around to finishing earlier: An explanation of the “percentigrade” error which even John Gibbons should be able to understand

The An Taisce IPCC rewriting is discussed at If you see something, say something – but who should feel obliged to do so? And when? 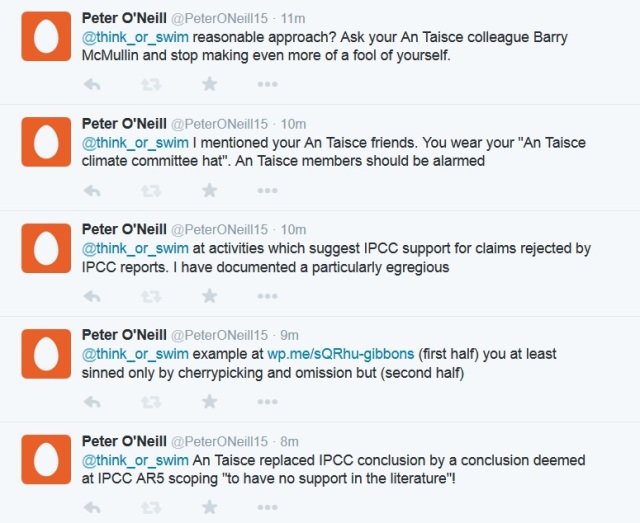 Bingo! Thank you for confirming the very point I made in relation to your response to corrections.

I fancy that term wacko. Anyone prepared to swallow a +3.6°C rise by 2035 (23 years from 2012 I believe, at least according to non-alarmist arithmetic), or more than 1.5°C per decade, conjures up the image for me of a sandwich-board wearing wacko in twenty years time feverishly over-painting 2035 by 2036. Unfortunately my prospects of being around then to have a good laugh are probably not as good as John’s.

For anyone who needs this put in context, that suggested rise of more than 1.5°C per decade can be compared with the change [simple linear regression without correction for autocorrelation] over the past 20 years for the various temperature series used by the IPCC (and for the arithmetically challenged alarmist, please note that a 20 year period ending in 2014, the last full year, does not start in 1998, but rather in 1995). In descending order, and all in °C per decade: NOAA land only 0.17°C, Gistemp land only 0.15°C, UAH 0.12°C, Gistemp land plus ocean 0.11°C, HADCRUT4 0.10°C, NOAA land plus ocean 0.09°C, NOAA ocean 0.06°C and RSS 0.03°C. Even the “best” cherrypick, NOAA land only, still falls awfully far short of 1.5°C.

This entry was posted in Uncategorized and tagged alarmism, An Taisce, Irish Alarmists, John Gibbons, Misinformation. Bookmark the permalink.

This site uses Akismet to reduce spam. Learn how your comment data is processed.